At least 16 people were injured on Tuesday when Israeli forces clashed with Palestinians gathered at the northern borders of the Gaza Strip, according to a local reporter citing the Gaza Health Ministry.

According to the reporter, Israeli soldiers "opened fire" on the Palestinians and also fired tear gas.

A video of the incident showed Palestinians using slingshots to hurl rocks towards the Israeli military amid clouds of tear gas.

The video also showed medics treating injured Palestinians and one member of the press who appeared to be suffering the effects of tear gas.

According to the reporter, the injured were treated in hospital and their condition was described as "moderate." 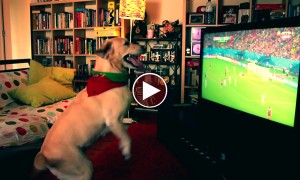 Puppy hilariously jumps onto Golden Retriever's back and goes for ride