Info from Licensor: "These are Australian Flying-foxes (fruit bats) species - Grey-Headed Flying-Foxes GHFF. They are NOT pets; they are wildlife. They were rescued from the environment during an extreme heat event; and were transferred to us; traveling 750klms. Once rehabilitated, they will be released back to their habitat. In Australia, they are classed as a 'keystone species' high canopy pollinator and seed disperser; vital to our environment.
This video was taken for education purposes to show a stage (at approx. 7-8 weeks old) in their weaning from milk to fruit. They will be released around late March; which is vital due to devastating events causing so many deaths along the east coast of Australia." 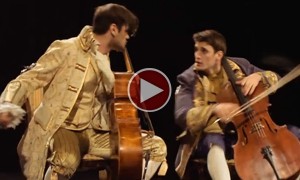 Face to Face with an Impressive Moray Eel