A girl won a charity auction for cancer research at James Ingham’s fundraiser in London, for a photo on stage with reality TV stars Gemma Collins and James Argent.

The footage filmed last night (April 10) shows the auction at the "Jog On to Cancer" event at the Proud Club in Embankment, as the winner bid against herself for a chance to win the prize and to see her photo in OK! magazine. 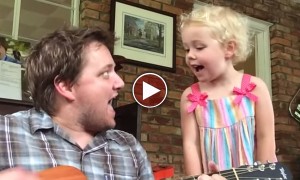