This was the bizarre moment tourists were confronted with a family of ''ewok-like troll monkeys'' playing music on a Thai island.

The creatures were seen sheltering under the rocks in Railay Bay in Krabi, Thailand, as bemused holidaymakers passed by a longboat and others in kayaks.

A hypnotic ''cacophonic ritual'' was playing across the water.

However, despite the almost alien-like appearance, the monkeys were actually performance actors and the sound was coming from travelling vocalist Tori Wranes who had staged the bizarre scene with local acting group Thailand Biennale.

Onlooker Jemayel Khawaja, who recorded the video, said: ''So we were kayaking around Railay Bay in Thailand, turned a corner towards a cave, and found ourselves confronted with perhaps the most surreal and bizarre situation I've ever experienced - Ewok-like troll creatures engaged in some cacophonic ritual in the water. 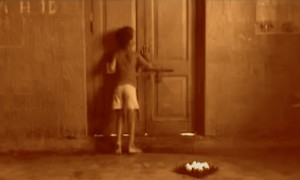