Watch the moment Brazilian activist Arteval Duarte uses his teeth to carry six rattlesnakes by their tails as a protest against Amazon deforestation.

In the clip, Duarte tapes around the rattlesnake's tails before he carries the snakes by his teeth whilst standing on metal spikes.

The snakes possess a neurotoxic poison which affects the nervous system of the victim if bitten.

The clip was captured on February 6 in the vicinity of Vilhena in the state of Rodonia.

The Amazon forest is home to 1 in 10 of known species on Earth and is being destroyed at a rate of 2,00 trees per a minute- if this continues there will be no trees in the Amazon by 2030. 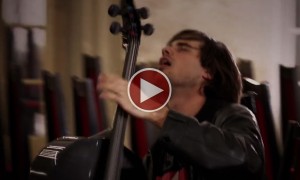