A pod of humpback whales was spotted off the coast of Molokini Crater in Hawaii doing underwater acrobatics.

The footage, filmed on January 16 using a special red-tinted camera lens that films clearer underwater, shows the gentle giants breaching the sea surface, then inverts the perspective allowing us to see the whales 'ascend' deeper. 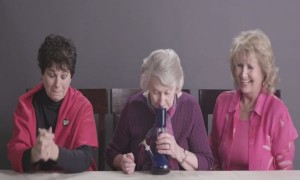 Wahey! Student tumbles after friend smacks takeaway out of his hand