An alleged drug dealer who escaped police by crawling into a muddy drain then needed their help - after getting stuck for 24 hours.

Sopha Ardjalee, 46, was stopped by the patrolling officer while riding a motorcycle without a license plate in Samut Prakan, central Thailand on Sunday (June 30).

Two officers asked to search him but the suspicious-looking driver refused to cooperate and attempted to escape.

Mobile phone footage shows how Sopha bit their hands as they tried to handcuff him to a bridge barrier. The suspect then stumbled and fell into the dirty canal, with his pants coming off.

He then scurried deep into the drainage system - but needed the police to save him the next day after getting stuck and crying for help.

Footage from yesterday (July 1) around 10.30am shows volunteers tried to locate him before removing the concrete pit, which was 300 metres away from where he fell.

He eventually emerged covered in sewage and told police he was thankful to them for saving his life.

He said: ''I was so hungry and thirsty. It smelled so bad in there. I didn't think I would ever get out alive.''

Senior Sergeant Major Kiatisak Kongphetsak and Corporal Chontit Phinsuwan said he initially called for back-up to search for the middle-aged man after finding meth in the back pocket during the struggle.

Police from the Phra Pradaeng police station monitored the area overnight but could not find the escaped suspect until residents told them that they heard a man crying for help from underground.

Rescuing the fugitive took longer than they expected as Sopha was too tired to push himself up. They gave him a bottle of water to regain some strength before successfully rescuing him from the drainage.

The drug addict was washed as his body was fully covered with stinky mud and then taken to a nearby hospital under the police custody.

Lieutenant Colonel Sanyan Phuphanna, the inspector of Phra Pradaeng police station, said: ''We took him for a physical checkup to make sure he wasn't injured during the escape.

''Primarily, Sopha will be charged for drug use and possession and will detain to pursue legal proceedings.

''This would not have happened if he had surrendered to police in the first instance. He could have died in there.'' 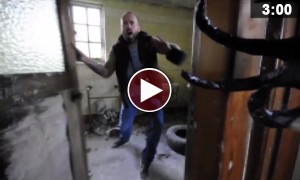 Chilled out dog relaxes on couch like a human