This cat certainly likes to most of the heavy recent snow in Quebec.

Boot, approximately three years old, is seen here jumping towards the snow and clasping its paws to try to catch flakes.

Writes the filmer: "This is my roommate's cat named Boot, he is approximately three years old. He was given to my roommate by a lady from Alfred, Ontario (she had a dog and it didn't work between the dog and Boot, so she gave him away).''

''He enjoys going outside occasionally to catch snowflakes with his little paws and wander around in the neighborhood (the device on his collar is a GPS tracker from Petsmart, so that my roommate can check on her phone via Bluetooth where he is outside).''

The cute scene was captured outside the filmer's apartment in Gatineau, Quebec, on January 18. 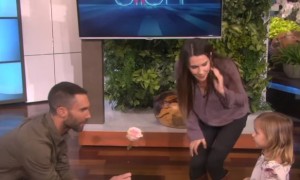