A woman used her foot to prevent a train from departing after arriving late at Guangzhou south railway station.

Train staff can be seen trying to drag her away, but she squatted beside the train and refused to leave.

According to reports, the woman with two friends arrived at the train station late and the check-in gate was closed already.

Since they were afraid that they could not go back to the office because they missed the train, they forced their way through onto the platform.

Finally, the train staff dragged the woman away and the train was delayed for seven minutes.

Police detained the woman for nine days and her two friends got an administrative warning. 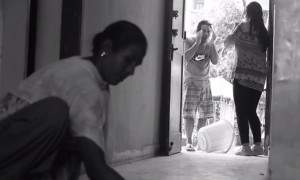