Drivers had a death-defying near miss after a huge concrete pipe came loose from a truck and crashed onto the road.

The eighteen-wheeler had 24 of the items stacked on its flatbed to be delivered to a building site when it rounded a bend in Bangkok, Thailand yesterday morning (June 13).

Dashcam footage from another motorist shows how one of the heavy concrete pipes toppled off and fell in front of his car - narrowly avoiding a potentially deadly crash.

Onlooker Thanarat Fueangruethaikul, 27, said he raced after the driver to make him aware of what had happened because ''he didn’t seem to notice''.

Thanarat said: ''I drove alongside the truck, rolled the window down, and talked to the driver to ask if he knew that the huge pipe had dropped off. He looked very confused and said that he didn’t notice it.

''I didn’t think he drove back there to pick it up after I told him it had been smashed. I think officials might already have moved it off the road.

''Luckily, there were no motorcycles trying cutting in front of my car while the pipe was falling otherwise it would’ve been a worse accident.

''The driver will have to explain to his superiors why one of the pipes is missing.''

The accident caused a brief traffic jam during the morning rush hour on the Kalapapruek Road in the Thai capital before police moved the debris from the accident. 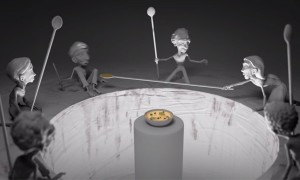 Watch as a Eurasian jay feeds its 5 babies in China

Bear with us! Mama bear and four cubs make driver wait as they dash across US road