Tourists threw rocks at a large saltwater crocodile in south-eastern China, believing it wasn't real, and leaving it with bleeding injuries.

In the video, filmed in a zoo in Xiamen City in southwestern Fujian Province on October 31st, the 37-year-old male saltwater crocodile named Xiao He is seen bleeding from wounds to his head and foot, before being treated for these injuries.

Xiao He is 5.8-metres long and weighs in at 1250-kilograms but was struck and wounded by rocks thrown at him from a family of tourists.

Since Xiao He did not move in his enclosure, it is believed the family members suspected that he was a model and tried to verify this by throwing rocks at him. The family stopped and left after Xiao He's head started to bleed.

As saltwater crocodiles are endangered, the tourist culprits technically broke the law.

Police have received a report from the zoo and they are searching for the culprits now, however since the zoo was still in a trial run and had not installed security cameras, it has made tracking difficult. 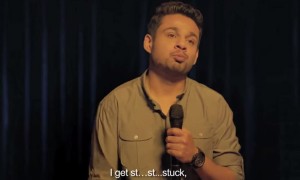