A Minnesota man captures the moment when his adorable dog Harper takes on the the defiant duck Wilson in a friendly fight that has a heartwarming backstory in November 2018.

"Wilson actually lost his friend he was raised with in a fox attack but after that he became best buddies with Harper," said Chris Ward, the filmer and Harper's human.

"They always chase each other and wind each other up but Harper the dog will never bite down on him, she’s still very gentle," said Ward. 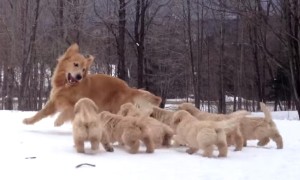