A four-year-old from Massachusetts used some foolproof logic to argue why her dad shouldn't marry, as he hadn't met and dated his partner in college.

The adorable video, filmed in Boston in April 2014, shows the girl claiming that her dad can't marry anyone, but then giving a cheeky smile when her father asks about if she can marry.

The filmer, her father commented: "In this video she was under the assumption that you could only marry people you met and dated in college.

"She's young so not everything she says is clearly logical.

"I knew a double standard was involved which is why I asked her if she could marry even though she was stating I could not." 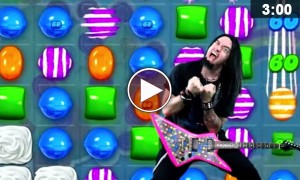 Rock vs gunpowder: an explosive experiment