One man in Shanghai seen here registered his disapproval by placing “Not Me” stickers on a Dolce & Gabbana shop window on Wednesday (November 21).

The furore broke out after the video campaign that showed a Chinese woman struggling to eat pizza and pasta with chopsticks.

Then, in a private Instagram conversation, designer Stefano Gabbana is alleged to have made a reference to "China Ignorant Dirty Smelling Mafia" and using the smiling poo emoji to describe the country, according to wire reports.

Several Chinese celebrities representing the brand refused to attend a Dolce & Gabbana show in Shanghai, which was supposed to be held on November 21 and was cancelled just hours before it was due to start.

However, Stefano Gabbana denied writing the messages and pasted the words “not me” over images of the alleged comments.

The company said Gabbana's account had been hacked, according to reports.

However, the company's founders have since made a video apology. 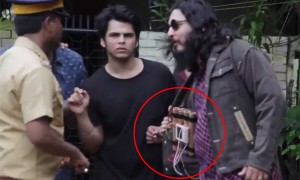 Meet Stepan, the Russian bear that loves to share treats with his owner