A heroic soldier ran to rescue a nine-month-old baby falling down an escalator at a Chinese mall.

The CCTV video, captured in Wuxi City in eastern China’s Jiangsu Province on January 18, shows an infant in a baby walker moving out of a restaurant to the edge of a six-metre-high escalator and started tumbling down.

A man walking past can be seen immediately running to save the baby, catching her and carrying her back to the top of the escalator and returning her to her mum.

According to reports, the baby’s parents ran a restaurant in the shopping mall. The baby walked out of the restaurant by herself on that day as her parents were too busy at that moment to take care of her.

Since the soldier named Wang Zihao heard some abnormal noise from the escalator when he was shopping with his cousin and turned his head around to check, he saw the flipped over baby walker and the baby and ran to save her immediately.

Thanks to the soldier’s quick move, the baby only sustained light injuries. 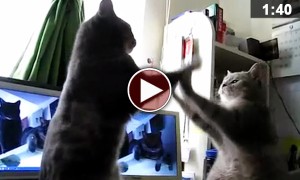