The 5-year-old boy's mood switches several times from laughing and excitement to being miserable and crying.

As Nathan scores a goal on the video game, his distraught cousin drops his controller and starts sobbing.

Nathan, who filmed the video, told Newsflare: "My cousin from Ghana came over and was begging me to play games after I helped him finish his homework. As we were playing, I realised how funny his mood changes were and decided to film it."

This funny scene was filmed at their home in London on Sunday April 14. The 5-year-old's parents have granted permission for him to be in the video. 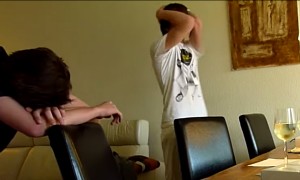