Watch this adorable acrobatic pup leap across furniture in his new Virginia home on May 21.

The cute little dog, named Charles, takes a running leap onto an ottoman and, like a gazelle, leaps in one bound from the ottoman to the bed.

His owner turns into a bundle of giggles as he watches his agile dog tackle the improvised obstacle course.

Charles' already adorable face exudes pure jubilation after landing on the bed before darting off again to have another go in his homemade playground.

The footage is shot from the bed showing the full length of the room in which Charles leaps from ottoman to bed with ease. The close-up of his face filled with happiness after landing on the bed is utterly heart-melting.

The pitter-patter of Charles' little feet speeding across the hardwood floor adds to the cute-factor of this hilarious clip. This, coupled with the four-legged gazelle-like leap, makes this bounding hound the star of a truly hilarious video. 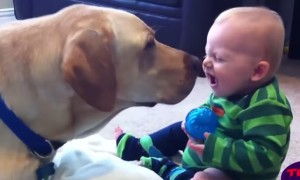