Meet the Manila trolley boys running their own illegal railway - ferrying commuters on handmade carts while risking being crushed to death by oncoming trains.

The men haul their rickety wooden carriages - complete with sun parasols - onto the tracks in the capital of the Philippines, somehow managing to avoid the dozens of locomotives that thunder by each day.

Passengers pay them 10 peso (15p) per trip, grateful for a way to avoid heavy congestion on the city's roads and dodge higher ticket prices on the actual train system.

The illegal railway has been dubbed ''the world's most dangerous commute'' but demand from commuters - including office workers and teachers - is soaring.

Miraculously, there has never been an accident between the trains and the pushcarts, which the men need to propel forward like a skateboard.

Speaking in the video, twelve-year-old Ronel Garcia said that he can earn up to 200 peso (3GBP) a day for the back-breaking work. 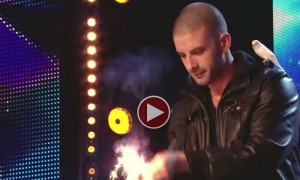