This was the moment a massive dust storm hit Churu, Rajasthan in north India yesterday (April 7).

In the video, the entire city is seen being engulfed in a thick blanket of dark dust that approaches the city as panicked residents captured the incident on their mobile phones from the rooftop.

The dust storm originated from the nearby desert and hit the city causing a massive loss to local farmers as it swept away huge quantities of crops.

No damage to any human lives have been reported but some minor loss to the properties were seen. 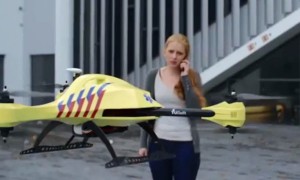