Every year this Thai town holds a birthday party for its population of wild monkeys - and the results are crazy.

Tables of fruit, candy, ice cream and juice are laid out on tables throughout the day in Lopburi, Thailand.

Monkeys grappled for the sweets, with larger creatures scaring away the smaller ones. Some monkeys even leapt onto the heads of spectators. One photographer had two animals balanced on his head after they knocked off his hat.

While several of the women found themselves with monkeys on their head pulling at their hair and tugging at their clothes.

The Lopburi Monkey Party has become an annual attraction for locals and tourists across the central province.

Buddhists believe that the monkey is a symbol of good luck and that by honouring them with a birthday party, they will receive good fortune in the year ahead. 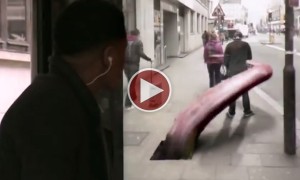