Info from Licensor: "We have had tremendous snowfall this winter season in my hometown of Fairbanks, Alaska. The moose around town have been very hungry lately because it has been too difficult for them to walk through the deep snow so they have been eating from trees near the cleared streets of the town. At the end of one snowstorm, the temperature warmed up and it rained resulting in a thick shiny ice layer everywhere. The city plow trucks cleared the streets which resulted in hard compact snow hills throughout our city. Strong enough to support the weight of a moose! I have been in Alaska all my life and have never seen a moose standing on a snow hill until this year. I came across the moose in my video on my drive home after work. He was happily feasting on branches that normally are not accessible because he was able to climb up a hill that was as high as a rooftop. Shortly after the video, someone else drove by and spooked him away. Later that same evening, I drove by the same corner and was surprised to find him again feasting on the same tree. It was amazing that I was able to see him up there let alone twice in one day!" 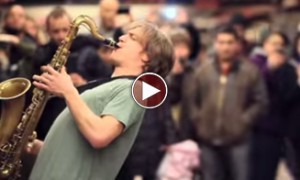 Kiddo Pretends to be Too Tired