There were massive explosions at a Russian arms depot in Siberia on Friday.

It comes just four days after the depot, near the city of Achinsk, was destroyed in a series of massive blasts.

Russia’s defence ministry has blamed lightening for the latest explosions, in which eight people were reportedly injured.

Residents of the nearby village of Kamenka were again evacuated. 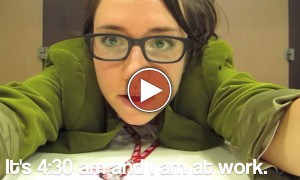 Bird Has Had it With Cheese Balls