Firefighters rescued an old man trapped in an icy river after he had waded out to save his dog.

In the video, filmed in Heze City in eastern China’s Shandong Province on January 13, a fireman walks through the frozen river with a life jacket and rope ladder to try and reach the old man with his dog, who are isolated on an island in the centre of the river.

In a later clip, the old man, wearing the life jacket that fireman brought to him, tries to walk back to the shore with the fireman holds his dog for him.

Since the man’s dog fell into the river accidentally, he jumped into the water to try to rescue his dog but ended up getting stuck there.

The man and his dog were saved successfully, according to reports. 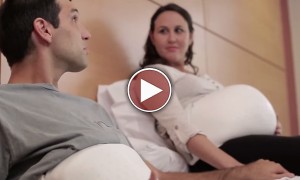