Info from Licensor: I was feeding squirrels daily for my cats to watch when I rescued a 9-ish-year-old Doberman, Eileen. After about two months, I looked out the window one day to see her sitting statue-still with squirrels frolicking about all around her. She never made a move to go after them, even when they ran right across her path or dared close enough to sniff her. So from then on, I would throw peanuts in the yard when I let her out, and she would sit for 2-3 hours, rain or shine, amongst the squirrels as they ran, munched, and buried peanuts. I never taught her this. It was almost as if she knew that if she moved they would run away. If she had to readjust her position, like from sitting to laying down, she would move excruciatingly slow. Bluejays eventually came, and the crows even began to trust her and would fly in for some peanuts. For 2.5 years this went on until we moved to a new house on the other side of the country where I can't seem to draw squirrels to the yard. 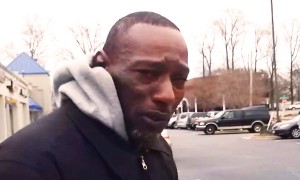