An out-of-control lorry slid into a car and ripped its roof off in eastern China.

In the CCTV video, filmed in Jinhua City in Zhejiang Province on April 11, a lorry lost control on a slippery road following recent rainfall, after the driver braked at some traffic lights.

The rogue lorry slid into a car waiting for the traffic lights at the intersection and hit the car's rear, ripping the roof off.

The lorry could not stop until it crashed into a wall on the side of the road.

According to reports, the car was driven by a driving instructor who had three students with him to practise driving on the road.

Fortunately, none of them were injured. The case was being investigated. 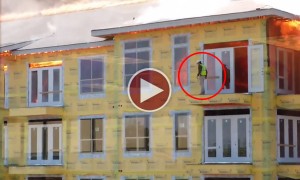 Baby and Cat Snuggle – SO CUTE