A five-year-old boy drove a toy car on a national highway under escort from his parents.

CCTV video captured in Jinhua City in eastern Zhejiang Province on October 17 shows the boy driving a go-kart along a busy road while his father rides a scooter beside him. The boy's mother is also on the scooter.

According to local media, this was not the first time that his parents had accompanied their son driving his go-kart on the road.

Police stopped the family and fined the parents, reports said. 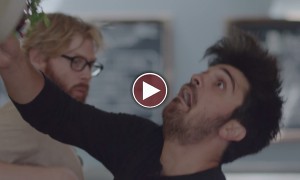