Info from Licensor: "My family and I were leaving the beach for the day in Venice, Florida. When we went over the Albee Bridge, I noticed a big Sheriff's Department boat with the lights on in the water and then I saw what I thought was somebody on a jet ski, but nope, it was a boat with nobody in it, spinning wildly in circles! My husband missed it because he was driving, so he said let's turn around and I'll get you right next to it. So he turned around and drove me right next to the action and that's where I got out of the truck, stood on a picnic bench and recorded everything. You'll see in the video there was another boat with a couple of kids in it. They were trying to get close to it for whatever reason but you can hear the people on the dock yelling at them and telling them to go away and not get close. At one point, you see somebody with a rope trying to lasso the boat in but that didn't work. So, the boat was spinning and spinning like crazy until it eventually hit the dock, then finally entered a little nook where the sheriff's department boat was right there to block it in. There were no ambulances or anything else, so it appeared as if everybody was safe and nobody was hurt. There's still no word on how the boat got that way and where the owners are." 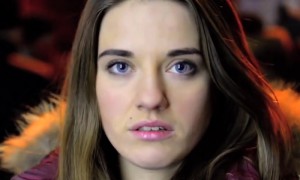