This video captured from body cams and in-car video of a tanker truck accident shows Officers Carter Willmon and Roger Ordaz risk their lives to save the driver. Before their arrival, the tanker truck drove off of a 40+ foot flyover and broke into two pieces – cab in the southbound lanes and tanker burning nearby in the northbound lanes.

When they approached the cab, they did not know what was inside the burning tanker. It could have been gasoline - ready to explode - or a deadly chemical. They didn’t care. They took the risk and approached the cab to see if they could rescue the screaming, injured man.

The driver, identified as Leslie Rodriguez, 60, of Edinburg, Texas, is recovering in a Tyler hospital and is expected to make a complete recovery. We still do not know what caused him to veer off the flyover. 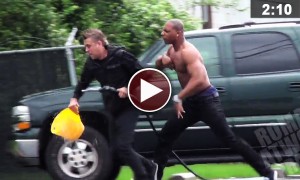 Guessing Game Ends with a Snap