Protesters gather in Victoria Park for a rally and unfurl a large banner while marching through the streets of Hong Kong Island on August 18, despite police issuing a letter of objection for the march to go ahead. Organizers claim 1.7 million people joined the rally and march.

The filmer captures the march as it progresses through the streets of Wanchai chanting 'Hong Kong People, go for it!' in Cantonese.

Footage also shows a river of umbrellas slowly passing through a rain-soaked street under which protesters continue to demonstrate their resistance to the Extradition Bill.

The Civil Human Rights Front organised the rally in Victoria Park regarding the controversial bill, pro-democracy and the 5 demands made by the protesters.

The footage also shows protesters walking through very crowded streets in Causeway Bay trying to get to the rally in Victoria Park.
Some intrepid activists walk on the rain-soaked main roads, while allowing one lane of traffic to flow.

The unauthorized protest march reportedly brought much of Hong Kong Island traffic to a standstill. 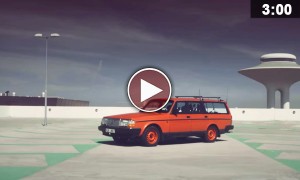