This is the moment visitors to the Kruger National Park in South Africa spotted a snake performing a bizarre head-banging dance.

"We were casually strolling along a pathway when a long, green coloured snake suddenly appeared in the pathway," the filmer said.

"We quickly identified the snake as a spotted bush snake. During the summer months we often see this species of snake... but on this day, there was something very different and weird about this particular snake," the filmer added.

"After moving around normally, the snake suddenly hanged itself from a small bridge on the pathway, looking like it was performing some weird and very unusual looking dance," he said.

"We were stunned by this behaviour and never seen anything like this before. I then took the video and showed it to various snake experts in the area," the filmer said.

"There were a number of possible explanations and educated opinions regarding this rare and strange behaviour, but not one specific reason everyone could agree on," he added.

"It’s amazing how Mother Nature can still baffle us, even the experts," he concluded.

The clip was filmed on March 19. 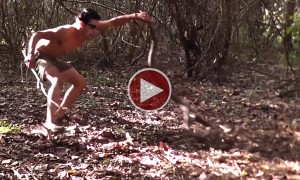 Dog becomes a statue while begging owner for ravioli

Jack Russell and Emu Playfully Chase Each Other