This is the moment researchers freed a manta ray which was trapped in a net in Mozambique.

Nakia Cullain and Corey Nevels from Marine Action Research were on their way back from a dive near the beach of Zavora last June when they noticed a buoy moving in an unusual way.

"We grabbed the buoy and starting pulling the net into the boat when we noticed a large manta ray entangled in it," Cullain said.

"Immediately the two main researchers grabbed their scuba gear, jumped in and started cutting the net to set her free," Cullain added.

"At the end of the video, once the manta is released, you can see her swim back towards the camera. She did a circle around us to say thank you," Cullain said.

According to Cullain, fishermen in Mozambique often use gillnets in which rays, dolphins and turtles frequently get caught up.

"We were lucky to be in the right place at the right time to save this magnificent animal," Cullain concluded. 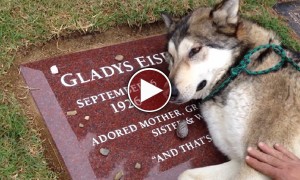