A group of kind-hearted people turned a car over to rescue people trapped inside after it flipped into a river in southwestern China.

In the clip, shot in Kaiyang county in Guizhou province on July 27, a car gets stuck upside-down in a river and nearby people jump into the river to rescue the trapped people inside.

After they opened the car doors and took several people out, more people joined the rescue and they turned over the car together to save a one-year-old.

According to onlooker Mr Zhang, her 20-year-old niece was the first one who jumped into the river.

The car driver swam out of the car by himself and the 20-year-old girl brought three other people to safety before more rescuers came.

The one-year-old was sent to hospital and the rest people were unharmed. 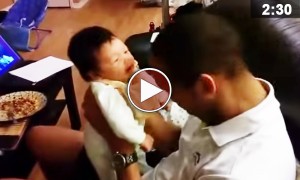 This closing door sounds exactly like the Jaws theme tune