Info from Licensor: "I was having a very relaxing day at the beach and looked to the south and saw a prop plane flying very low toward me. As it came closer, it continued to descend, so I took out my phone and moved away from where I was sitting to video the emergency landing. As it got closer, I could hear the engine sputtering and the plane then touched down almost directly in front of me on the sand. It taxied a bit further down the beach and came to a stop when the nose when down into the sand and the plane came to rest on its wheels. Thankfully no one, including the pilot, was injured thanks to the quick thinking of the pilot to land the plane on a less crowded portion of the beach." 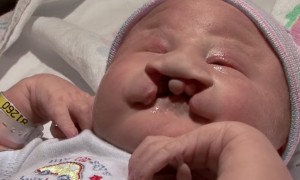 Cute Pomeranian gets stuck inside a toy train