Info from Licensor: "Inez was at a local street fair and was looking at a friends spinner booth. She did not know that her son, a United States Army soldier had returned early from being in a combat zone of Syria for the past nine months. Although Inez served 37 years in the Army herself and has another son that is a Major, she was still clearly surprised and overwhelmed with the emotion of having her youngest return home safely." 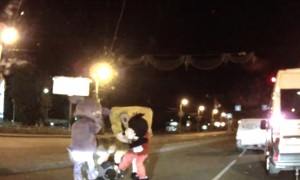