Info from Licensor: "This video was taken on our farm in the North West province. Our builders were on their way home, when they saw the snake and called us. We got to the road and saw the python lying in the grass. I called a snake handler as I realized it was too large for us to handle. During the capture of the python he lashed out and bit the handler on his left arm and right leg. It also tried to twist his tail around his legs. The handler managed to catch the head and tackle the snake to the ground. He then transferred it into a big dustbin and it was relocated in the mountains." 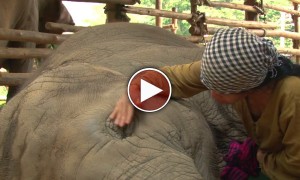