This is the spectacular moment a volcano had its hat on after a thick layer of flat clouds formed around the summit.

Locals were astonished to see the hat-shaped lenticular cloud blanketing the peak of Mount Rinjani on Lombok island, Indonesia on Wednesday (July 17).

Breathtaking footage captured from a home at the base shows the active volcano naturally adorned with a long white cloud around its summit.

Local resident, Rosyidin, said mist often gathers around the top of the volcano but this was the biggest and best cloud he had ever seen.

He said: ''It started around 7 AM and ended at 9:30. We were surprised to see how it was very thick and very round.

''It looked like the volcano was wearing a hat. It was amazing. I've lived here for many years and never seen anything like this. This was the biggest cloud and the sky everywhere else was clear.''

Lenticular clouds are dense, stationary clouds which are caused by air movement and often found near hills or mountains. 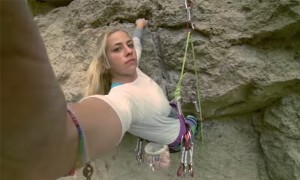