Underneath an aqueduct in Hommerts in the Netherlands lies the bodies of hundreds of dead mice.

Footage shows the carcasses scattered on a pavement below an aqueduct.

Anton Kappers, who filmed this bizarre scene on Wednesday (June 26), told Newsflare: "Every morning, there are hundreds of dead fieldmice in an aqueduct in the Netherlands. It is a mystery why the animals jump down.

"Most mice are immediately killed after they drop, some are injured and a few of them survive and run away. Research is being carried out into the cause of the tragic spectacle."

In the video, local ecologist at mouse expert Nico Beemster visits the site and explains the strange phenomenon, which has got the attention of local media.

"We are dealing with very high numbers of mice around Hommerts," he explains. "It is possible that so many mice have ended up here due to great competition. They probably get into combat and throw each other into the aqueduct. I have never experienced this before."

He adds: "There are stories of lemmings that fall off cliffs ... perhaps this aqueduct shows there is some truth in it: That lemmings and mice can fall down in this situation." 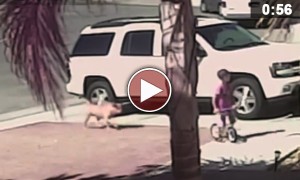