Info from Licensor: "Bo hangs out with me while I work and loves to lay on the spare computer chair, which we kept around just for him. Bo gets bored easily and that day randomly stars attacking and chasing his tail, so I just decide to record him for a bit. The tail chasing then turns into him attacking the chair while spinning in circles like a lunatic.

He puts just a little too much power in that last spin and goes flying off the chair. He tries to catch himself by clawing into the seat, but it’s too late. As he falls, he takes the chair with him and it lands right on top of him.

He emerges quickly from the wreckage unharmed, then walks around to admire his work while trying to understand why his favorite chair would ever hurt him like that. 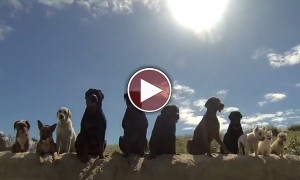 Son Meets up with Video Game Friend After 4 Years