Info from Licensor: "Darren Baldwin was kayaking off the Redcliffe peninsula. He was about 400 meters offshore when he noticed a helpless turtle which was tangled in crab pots. He tried himself to get it free but to no avail. He called a passerby fisherman on a boat. They managed to drag the 2 pots and the turtle to shore. After many failed attempts of trying to release the turtle, Darren finally called over a builder with some tin snips in his work belt. They were used to cut the very thick rope around the turtle's flippers. After about 30 mins, the turtle was free and swam off quite happily." 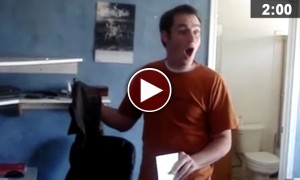