This is the terrifying moment a bus full of passengers were trapped on a narrow mountain road - yards from a landslide.

The coach was travelling along the hilly road on November 4 in Benguet, the Philippines.

As the driver approached the bend, he noticed a rumbling ahead and stopped the vehicle while passengers looked on anxiously.

Suddenly the mountainside gave way and several tonnes of dirt, rocks and uprooted trees came crashing down - sparking screams from the passengers onboard.

The driver frantically tried to reverse as the rocks struck the bus, but with several cars pulled up behind him waiting the vehicle was stuck.

Miraculously nobody was injured after the landslide in the disaster-hit region of the Luzon Island, the most northern part of the Philippines.

One passenger said: ''We heard a rumble that was slowly getting louder like it was coming near so we knew there would be a landslide.

''The driver decided to stop. What we didn't expect is that it would be that bad. We had fine weather that day.

''The bus driver was not able to reverse the vehicle right away because there were cars behind. It was very, very scary. I'm thanksful nobody was hurt.'' 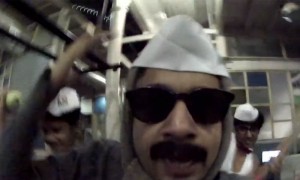 This woman’s tongue tricks will amaze you