A sneaky black cat steals a seat from his owner at the very last second in Bangkok, Thailand on June 12.

The fearless moggy named 'Look-Duay' used up one of his nine lives with the daring dash across the ground.

Owner Nan Udong was about to plonk her backside on the blue seat when she suddenly noticed five-month-old 'Look-Duay' underneath.
The woman paused mid-squat and stood back up - with the sly cat curled up comfortably in her position.
Luckily for the kitten, he avoided being crushed and ended up as the 'cat that got the chair'.
He was seen looking pleased with himself after pinching the position on the plastic blue chair while the owner, who has several cats in her home, had to stand.
Nan, from Bangkok, Thailand, said: ''He raced over and stole the seat from me as I was about to sit down. It was risky as I could have sat on him and hurt him. But he didn't seem to be bothered about that. I think he was just gloating about getting the seat first.'' 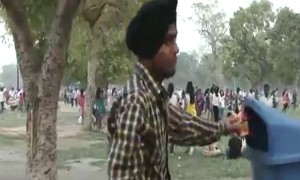 The good boys of summer: helpful dogs ride on top of truck