Kalu Ram, an eight-year-old boy claims he can turn on an LED light bulb just by touching it in Etah, Uttar Pradesh, India.

In the video, Kalu touches an LED light bulb and it immediately lights up as his father films him. However, when his father tries to do the same, it remains unlit.

When the bulb is handed back to Kalu, he turns the light bulb on again with just a touch of his finger.

Kalu claims to have discovered his 'talent' after his mother took out the bulb from the holder socket and kept it in a shelf. He spotted the bulb and was playing with it when it reportedly lit up - and it didn't glow at all when someone else handled it in the same way.

His neighbours also claim to have witnessed Kalu's talent. 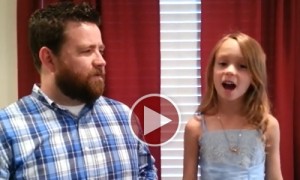