This is the moment the Airbus Beluga XL landed on British soil for the first time.

Large crowds gathered at Hawarden Airport, Broughton, near Chester, on Thursday afternoon (February 14) to see the plane touch down after its departure from Toulouse, France.

Its predecessor, the Beluga ST, garnered the nickname due to its whale-like shape.

Airbus employees voted to paint the new addition with a cheeky grin and eyes to make it look just like its namesake.

The plane will transport Airbus wings between various assembly plants around Europe.

There was chaos on the roads today as crowds gathered. In the area surrounding the runway, people abandoned their cars to see the gigantic plane fly over, its paintwork sporting the cheeky grin. 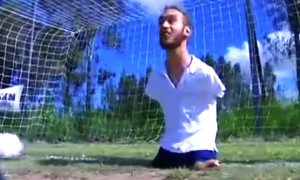 Chinchillas kiss each other to mark Valentine's Day