Dog owner Alexis has taught her dog a new way of going into his crate, by calling it ‘Askaban’ the same name as the prison in the Harry Potter films.

The clip shows Sirius the three-year-old golden retriever, who is also named after a Harry Potter character, climbing into his crate on command.

“Sirius, Askaban!” Alexis says, Sirius then runs out of the crate as Alexis tells him he’s free. 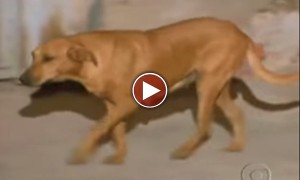