Thousands of mothers, children and fathers march through London during Mother's March 2019 with a focus on fighting climate change on May 12.

Celebrities join the march including TV presenter Konnie Huq, married to TV writer Charlie Brooker, who is filmed amongst chants of "Save our planet, save our bees!" Ms Huq appears to refuse to join in with the chant.

The march sought to bring attention and demand the global community adhere to the deadline of 2030 for tackling global warming, set by the United Nations.

Chants of "We are mothers and we are rising, it's our children you're compromising!" rang out as the march moved from Hyde Park to Parliament Square.

The demonstration was peaceful and filled with multi-coloured banners with one held by a young girl reading "Make a change for climate change."

The march was in solidarity with youth strike demonstrations such as the Extinction Rebellion which held 10 days of protests in April causing massive disruption across London.

Footage shows thousands of mothers, fathers and children singing and chanting as they peacefully walk from Hyde Park to Parliament Square during the Mother's March 2019.

Celebrity Konnie Huq walks along pushing a pram as people wave flags on which a 'bee graphic' is printed. Signs also include slogans "Save our planet, hands down."

There are also images of people in costume and on stilts next to a model of the earth in a giant pram. 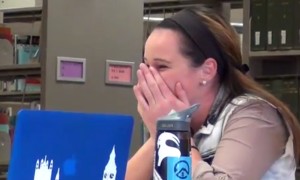