71-year-old farmer fed up with speeding motorists zooming through her village has put up a "scare-cop" like scarecrow, wearing a high-visibility jacket to trick them into slowing down.

The bizarre-looking mannequin was placed on the side of the road nearby resident Edie Pope, who was fearful someone might die if something wasn't done.

Edie says she was inspired to put a deterrent up after two crashes in quick succession on the single-lane carriageway that recently went from a 60mph to a 40mph zone.

The crop farmer modified a scarecrow she had entered into a local festival by dressing it in a yellow jacket, adding a £2 wig and putting a hat on it. 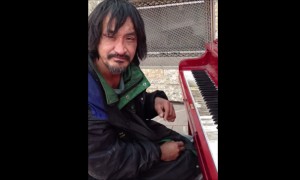 Thailand bus driver scrambles off highway to hurry to bathroom