This is the dramatic moment an unlicensed driver sped down a road with a police officer sprawled across the bonnet of his car.

Security camera footage, filmed in Xining City in Qinghai Province on November 2, shows the police officer lying on the bonnet of a white car as it speeds down a road.

The police officer's colleagues can be seen giving chase.

After more than 200 metres, the police officer finally falls into the road and the reckless driver flees.

According to reports, the driver rammed the officer after he asked to see the driver's license.

The police officer was later treated in hospital for his injuries.

Police arrested the driver within 24 hours and he was detained. 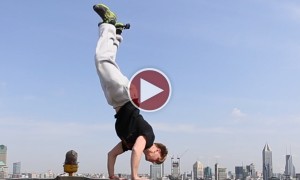