Urban explorers discovered floor to ceiling piles of donated water that never made it to the citizens of Flint during the water crisis and was left to rot.

Jimmy Cowell and his fiancée Kira Sutkay discovered the gallons of wasted water found inside a decaying school next to what used to be St. Agnes Church in Michigan on March 23.

Fundraisers had previously been held in the area since the start of the Flint water crisis, which became a global news story in 2015.

"Y'all really wanna know WTF happened and where the water distribution supply went! I'm livid about this s**t!" Cowell wrote on Facebook. "This video is only a 10th of what we [have] really seen."

"In reality, how does anyone forget about 47 tons of water!" he added.

Commenting on the response to his video from the people of Flint, he said: "At least six messaging me asking where the water is so they can go get some."

According to local news reports, Flint residents have been told that the tap water is now safe to drink but some residents disagree. 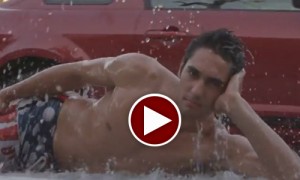