A young woman who has been bullied all her life for her facial deformities has found confidence after learning how to sing.

Jennifer Pulga, 29, was born with a rare genetic disorder characterised by deformities of the nose, forehead and limbs. She was teased by other children who branded her ''ugly'' making her shy and withdrawn.

Jennifer was reluctant to leave her home in Manila, Philippines, because of the stares and hurtful comments she received from strangers.

But a couple of years ago she found a love for singing - and started practising every day in front of the mirror and recording herself on her phone.

Slowly she developed an inner confidence after realising she had a talent for vocals - and people started praising her.

Jennifer now walks around with her head held high, unconcerned with what anybody thinks or says about her.

''Even now there are still some people who think it is okay to joke about my appearance. It's a good thing I haven't let them ruin my confidence. I think it's because I have something I love doing and a talent for singing that it hasn't affected me os much now,'' she said. 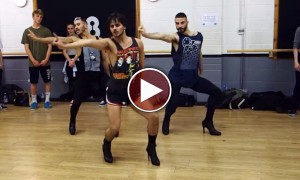 Doctor removes 15 years' worth of gunk from woman's clogged ear

Toddler miraculously avoids death after being run over twice