The clip, which was filmed during the first major swell of the season on Tuesday (October 16), shows Guedes ride the giant face of the wave for a few moments before losing his balance and falling.

He is instantly hit by a mountain of whitewater.

When Guedes finally surfaces after being held under for several seconds, another smaller wave breaks on top of him sweeping him towards the shore.

With the pounding surf letting up for a moment, a jet ski now picks up Guedes and takes him to the safety of the land.

Guedes suffered minor injuries due to his surfboard hitting his head during the wipeout, but was back outside shortly after.

Guedes, 32, is one of Portugal’s most experienced Big Wave Surfers, he is currently a wildcard for the WSL’s Nazaré Challenge, a contest part of the Big Wave Tour that will take place in Praia do Norte this winter. 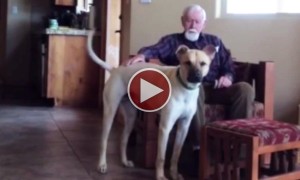 This cat is shocked to learn she is adopted